Even the Portanuova skyscrapers have their hero: Dimitar Harizanov – nicknamed Spider-Man – a professional of “harness-work”, photographer, musician, and social network star. We met him, as soon as he “got off” work (literally), in a spine-tingling ricochet of adventurous memories around the world and unexpected encounters on the façades of the District’s buildings. An incredible story that adds to the neighbourhood’s prestige.

PN: Were you bitten by a spider like Peter Parker or did you already have superpowers?
D.H. (laughs): In my country, Bulgaria, this job is rather common; it’s normal to see constructors hanging from buildings with ropes. But something sparked my desire to become one of them when I was 15. I looked out of the school bus' window riding home and I saw one of these men hanging in the air and wearing a sombrero for protection from the heat. I thought: “Cool stuff, I want to do that too”. I held that dream in the back of my mind even throughout my veterinary medicine studies – which I had chosen to make my first dream, in order of appearance, come true: saving the lives of animals. Then Llian Kinov, a famous Bulgarian alpinist, introduced me to climbing, and I focused on this job – which is also a lifestyle and passion – since 2004. 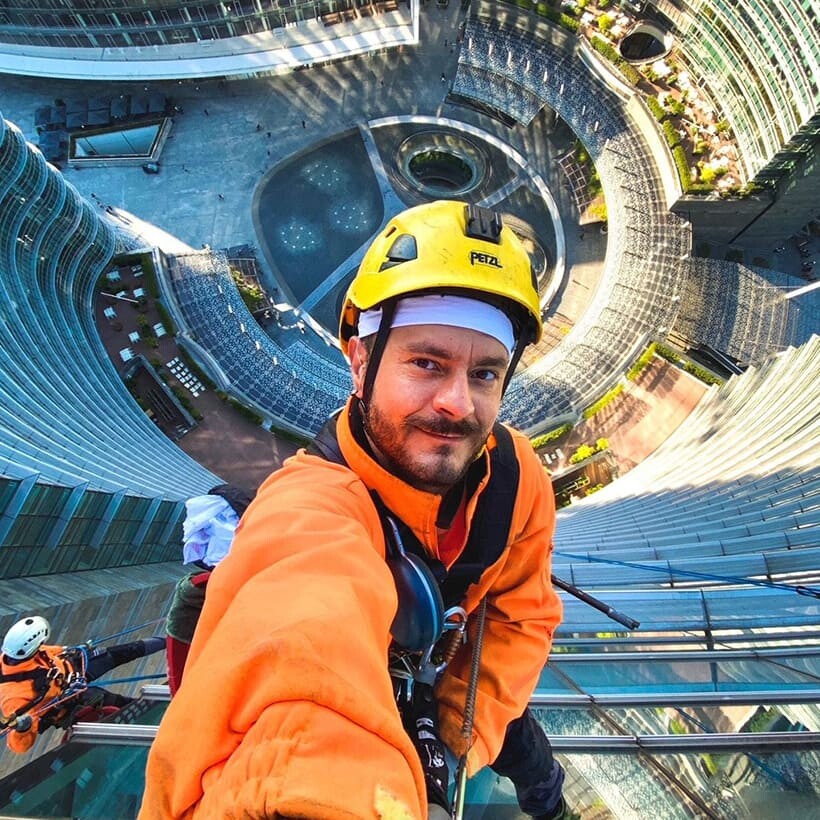 PN: Are you certified to do this job?
D.H.: My team and I have every possible international certification, and we are able to perform 12 types of rescue operations in case our colleagues are in danger.

PN: Are you only allowed to work on façades?
D.H.: I am authorized to work in the most dangerous conditions and on the most hazardous structures in the world, from wind turbines to oil platforms, to military facilities, to “civilian” skyscrapers. Wiping windows or performing maintenance is a secondary part of my job: the primary and most important part is the preventive risk assessment based on the structure, weather conditions, and operation type. In fact, my team and I dedicate most of our time to the securing process, because our lives are hanging by a thread as thin as a finger. Also, consider that a full harness like ours stops blood circulation after 25 minutes, which is another factor to take into account when we climb down.

PN: Who was the first person to call you Spider-Man?
D.H.: Reporters called me this way because just like Peter Parker I am also a photographer, and my shots are very requested by newspapers that don’t have correspondents hanging 200 m above ground. I live like a superhero, but safely, plus I am very sympathetic with other animals that love heights like me. It often occurs that I need to save a bird’s nest threatened by exceptional events while I work.

PN: That first dream of yours to save animals has also come true in the end.
D.H.: Exactly.

PN: Did you ever risk your life?
D.H.: In Bulgaria, they called me “never dead” because I survived situations of extreme risk. In our work, everything is the result of a series of actions, but if the sequence is interrupted by external factors, you have a problem. One time, I was hanging at the 7th floor of a building in Bulgaria, when a lady started hitting the tensioned ropes with a shovel to cut them…

PN: Why would she do that?
D.H.: Because they ruined her view! And she wasn’t joking, because she used the sharp side of the shovel to saw the rope. The police later told me the lady was known to be psychologically “unstable”…

PN: Well, these things happen to all of us…
D.H.: Oh really? Listen to this: I was working on trellises for military communication at 130 m, it was incredibly hot. All of a sudden the weather changed and the sky grew dark, charging with electricity. I felt like an enormous antenna to attract lightning.

PN: Okay, but you must’ve climbed down right away…
D.H.: I couldn’t, I had a… military schedule to follow. So I hastened the operation, while the structure started emitting a kind of roar, and as soon as I finished I descended in a flash, literally!

PN: What happened then?
D.H.: The sky unleashed every lightning in the world on the trellis, destroying the structure and my work, but fortunately not me.

PN: Describe your equipment.
D.H.: It is specific for this work, not for mountaineering like many people think. Every piece of equipment has two safety levels, one extra. Our harness is full-body, while the ones used in mountain climbing are partial. We use 5 to 30 carabiners, depending on the operation. Then we have stoppers, fall-arrest systems… We fasten the ropes to hooking points already installed on the buildings, while I carry the specific equipment in my backpack.

PN: Tell us about your team.
D.H.: We are 3 Bulgarians, childhood friends. We are the best in Italy. There is even Llian Kinov – the famous alpinist from my country who encouraged me to start years ago – and another buddy from my youth, Tzvetomir Vasilev.

PN: What exactly does your work involve?
D.H.: Risk assessment first of all, then window wiping and maintenance every day of the year. Operations also include inspection of building signs and more complex work, such as installing an air exhaust pipe at 140 m above ground in a space the size of a fridge. You can say we keep an eye on the work of architects once they are completed.

PN: What is the greatest threat to your safety?
D.H.: Wind and temperature. That’s why I always carry a thermometer and an anemometer. In the summer, when you’re at an altitude of 200 m, with the façade reflecting the heat of the Sun behind your back, the temperature can reach 75°C.

PN: Do you ever dream of flying or falling?
D.H.: Sometimes, but in dreams you are always safe.

PN: What sports do you practice?
D.H.: My adrenaline level is unlike that of other people. I rarely get scared, I always have my eyes on the prize, time freezes and I never lose concentration. As I am used to this chemistry, I don’t have fun unless I perform extreme sports, so I climb and I practice slacklining: I balance along a wire between two mountains as if I were a tightrope walker. Sometimes I even jump on it to complicate my life. I also bike and I love freeride snowboarding, which I started from zero by climbing to the top of the Breithorn (4,164 m) of the Monte Rosa massif, and sliding down. You know, you learn fast when you’re afraid!

PN: Do you watch TV?
D.H.: I don’t have one. I’m happy with streaming on my smartphone or PC.

PN: What are the buildings you take care of at Portanuova?
D.H.: All of them, I just came down from Gioia 22.

PN: Do you know the flying gardeners?
D.H.: Of course, they’re cool, we always say hello to each other when we’re up there.

PN: Have you known any residents while you were working?
D.H.: It happens often. I was working on the Bosco Vericale one day, and a famous football coach peeped out and offered a good coffee to all of my team. Also, sometimes a child would draw a smile on a piece of paper and show it to us, so I answer drawing with my finger on the glass. I love drawing, and music too: when I was in Bulgaria I played in 5 different rock bands. Back to my work, some people ask us to pose with them for a selfie once in a while. One time I was at the top floor of the UniCredit Tower and, even though it is forbidden to come out when we are working, I saw a distinguished man smoking unconcerned. I was surprised because, for example, if someone were to step on our ropes while we’re on the job, he could damage them, so we told him he wasn’t allowed to be there and he kindly went back in. Days later, while in the underground, I saw a picture of that same man on a newspaper: he was a famous businessman, who I met again and we exchanged greetings. Nice experience.

PN: Do you spend time at Portanuova even at ground level?
D.H.: After work, I always rest at the BAM, which is also a nice location to take pictures. In the summer, when I get down from the UniCredit Tower and enjoy an ice cream in Piazza Gae Aulenti, I look up at the spire and feel like it is a bit mine…

PN: What do you like about this neighbourhood?
D.A.: The view from above has changed my perception of it: we are the only ones who can say they’ve seen Portanuova from the top-down. As I observe it while hanging from the buildings, I have an overall view and get ideas as to where to go for a walk to shake off the work adrenaline. I think I could be a good tour guide for a friend visiting the District for the first time.

PN: What is an event related to your profession that you would like to promote at Portanuova?
D.H.: There is already a climbing gym for kids; I would like to put on a show to share my photographs, also because they are 4-D shots, since I document the District in every season, in every weather condition, and at any time of day.

PN: What products do you use to clean surfaces so large and exposed to the weather and to constant solar radiation?
D.H.: Special products, made not only to clean but also to protect the windows. It is not just a matter of aesthetics, but it is functional to the integrity of the surfaces.

D.H.: Oh, did you know that in my hometown Sofia there are numerous skyscrapers designed by Milanese architects? Maybe that’s why Portanuova feels a bit like home to me.